How To Interpret Ping Results

These days everybody uses networks to communicate. However, every now and then, we might face problems with our connections.

Developer Mike Muuss created the program PING in 1983. Its purpose was to detect and resolve network issues. Ping works by sending packets from one communicating party to another and then recalling the time taken for a response.

This process is termed ‘pinging’. Pinging gives results which tell the user everything about the speed of a connection. It also helps them resolve any issues that might be causing problems on the network.

In layman’s terms, it sends an “Are you awake?” message and expects a “Yes, I am” reply. This command is compatible with Windows, Linux or Mac and works in similar ways across the different platforms.

How does the ping command work?

Ping commands use the Internet Control Message Protocol (ICMP) in a series of echos to determine if the host is active, the packet loss while communicating with the host and the time required for a response. Ping is successful if: 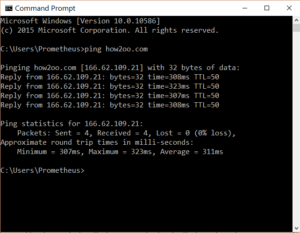 To use the ping command, type ping then a space followed by the IP address or domain name of the destination you want to ping. Pressing “enter” will send an echo message to the remote server.

This has to be done on the ‘command’ window (‘Start’ – ‘Run’ – ‘cmd’) in Windows. Users of other operating systems can make use of similar commands. When you see the first line with the server name, you should know that you are connected. The rest of the information follows in 32 bytes.

If there is a problem in the connection and the packets sent do not reach the host, a TTL message saying “Request Timed Out” is received. The number of bytes sent and received is also recorded and the time elapsed between sending and receiving will be displayed.

Similarly, in the “Ping Statistics” section the exact number of bytes sent and received can be verified and, if packets are lost on their way, a connection problem can be confirmed.

Another message displays the ‘approximate round trip time in milli-seconds’. This denotes the time elapsed to complete the ping process.

Now let us look at the messages and how to read them.

This message is displayed when the IP router does not find a host network ID for its packets. Here the route to the destination cannot be traced.

The IP router will display this message when the route to the destination cannot be found in the router table. Modern routers can deliver this message in a more detailed manner and it generally appears when the packets cannot reach their destination.

This message is sent by the destination host when the protocol in the their header does not match with the client protocol of the IP at the sender. This is a basic problem where IP protocols of sender and receiver do not match.

Sent by the destination host when it fails to find the destination port and cannot match with any running application on the host. These are common for UDP ports because in the case of TCP, it sends a connection reset segment when the port is not found.

This is a typical message which denotes that the host wants to fragment the datagram before sending, but a ‘no data fragmentation’ flag is set at the destination.

The IP router displays this message when it is unable to send a datagram using information which is stored in ‘Source Route’ in the header. The ‘source route failed’ message provides options on the same route for sending packets back to the sender.

This message is sent by the IP router when the destination host does not exist as shown by ‘Internet Layer Mechanisms’.

Just like the earlier message, the IP router sends this message when the destination host does not exist on the detected network layer mechanisms.

These are a few of the main results of the ping command. However, there are yet more possible error messages. These include: ‘Source host isolated’, ‘Host unreachable’ and ‘Communication with host/destination forbidden or prohibited’. These can relate to unexpected breaks in the connection due to firewalls and similar programs.